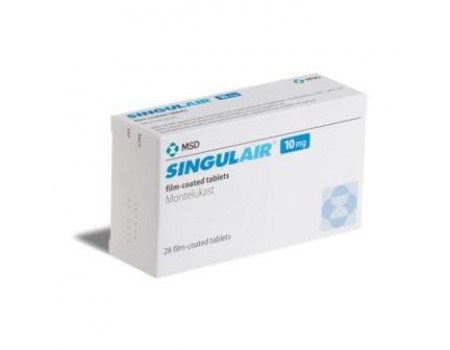 How Singular works
Leukotrienes cause narrowing and swelling of the airways in the lung and cause allergic symptoms. By blocking leukotrienes, Singular improves asthma symptoms, helps control asthma, and improves seasonal allergy symptoms (also known as hay fever or seasonal allergic rhinitis.

When to use Singular
Your doctor has prescribed Singular to treat asthma by preventing daytime and nighttime asthma symptoms.

Singular is used to treat adult patients and adolescents 15 years of age and older who are not well controlled by their medications and need additional treatment.
Singular also helps prevent the narrowing of the airways caused by exercise.
In patients with asthma in whom Singular is indicated for asthma, Singular may also be used for symptomatic relief of allergic rhinitis symptoms.
Your doctor will decide how Singular should be taken depending on the symptoms and severity of your asthma.

What is asthma
Asthma is a long-term disease.

difficulty breathing caused by narrowed airways. This narrowing of the airways worsens or improves in response to various conditions.
sensitive airways that react to many things, such as cigarette smoke, pollen or cold air, or exertion.
edema (inflammation) of the lining of the respiratory tract.
Asthma symptoms include: coughing, wheezing and chest tightness.

2. What you need to know before you take Singular
Tell your doctor about any medical problems or allergies you have or have had.

Do not take Singular
if you are allergic to montelukast or any of the other ingredients of this medicine (listed in section 6).
Warnings and precautions
Talk to your doctor or pharmacist before taking Singular

If your asthma or breathing gets worse, tell your doctor straight away.
Oral Singular is not intended to treat acute asthma attacks. If an attack occurs, follow the instructions your doctor has given you. Always carry a life-saving inhaler for asthma attacks.
It is important to take all asthma medications prescribed by your doctor. Singular should not be used in place of other asthma medicines prescribed by your doctor.
Any patient taking anti-asthma medication should be advised to consult their doctor if a combination of symptoms such as a flu-like condition, numbness or tingling of the hands or feet, worsening of pulmonary symptoms and/or rash occurs.
You should not take acetylsalicylic acid (aspirin) or anti-inflammatory medicines (known as non-steroidal anti-inflammatory drugs or NSAIDs) if they make your asthma worse.
Patients should be advised that various neuropsychiatric events (eg, changes in behavior or mood) have been reported in adults, adolescents and children treated with Singular (see section 4). If you develop such symptoms while taking Singular, you should consult your doctor.

Children and adolescents
This medicine should not be used in children under 15 years of age.

Different forms of this drug are available for pediatric patients under 18 years of age depending on the age group.

Other medicines and Singular
Tell your doctor or pharmacist if your child is taking or has recently taken or might take any other medicines, including those obtained without a prescription.

Before you start taking Singular, tell your doctor if you are taking the following medicines:

Pregnancy and breastfeeding
If you are pregnant or breast-feeding, think you may be pregnant or are planning to become pregnant, talk to your doctor or pharmacist before using Singular.

Pregnancy
Your doctor will decide whether you can take Singular during this period.

Take only one Singular tablet once a day as prescribed by your doctor.
The medicine should be taken even if you have no symptoms or have an acute asthma attack.
For adults and adolescents aged 15 years and older:
The recommended dose is one 10 mg tablet daily, taken in the evening.
If you are taking Singular, make sure you are not taking other medicines containing the same active ingredient, montelukast.

This medicine is for oral use.
You can take Singular 10 mg with or without water.

If you have taken more than the required dose of Singular
Seek advice from your doctor immediately.
In the majority of reported cases of overdose, no adverse reactions were reported. The most commonly reported overdose symptoms in adults and children included abdominal pain, drowsiness, thirst, headache, vomiting, and hyperactivity.

If you forget to take Singular
Try taking Singular as prescribed by your doctor. However, if you miss a dose, simply continue with the usual regimen of one tablet once a day. Do not take a double dose to make up for a missed dose.

If you have stopped taking Singular
Singular can only treat your asthma if you keep taking it.
It is very important that you continue taking Singular for as long as your doctor has prescribed. This will help control your asthma.

If you have any further questions related to the use of this product, please ask your doctor or pharmacist.

4. Possible side effects
Like all medicines, this medicine can cause side effects, although not everybody gets them.

In clinical trials with Singular 10 mg film-coated tablets, the most commonly reported side effects (may affect up to 1 in 10 people) associated with Singular were:

stomach ache
headache
Generally, these side effects are mild and occur more often in patients treated with Singular compared to placebo (a pill that does not contain any medicine).

Serious side effects
Talk to your doctor immediately if you notice any of the following side effects, which may be serious and may require emergency medical attention.

Uncommon: may affect up to 1 in 100 people
allergic reactions including swelling of the face, lips, tongue and/or throat which may cause difficulty breathing or swallowing
changes in behavior and mood: anxiety, including aggressive behavior or hostility, depression
seizure
Rare: may affect up to 1 in 1,000 people
increased tendency to bleed
tremor
palpitations
Very rare: may affect up to 1 in 10,000 people
a combination of flu-like symptoms, numbness or tingling of the hands and feet, worsening lung symptoms and/or a rash (Churg-Strauss syndrome) (see section 2)
decreased platelet count
changes in behavior and mood: hallucinations, disorientation, thoughts and behavior related to suicide
edema (inflammation) of the lung
severe skin reactions (erythema multiforme) which may appear without warning
inflammation of the liver (hepatitis)
Other post-marketing side effects
Very common: may affect more than 1 in 10 people
upper respiratory tract infection
Common: may affect up to 1 in 10 people
diarrhea, nausea, vomiting
rash
a fever
increased levels of liver enzymes
Uncommon: may affect up to 1 in 100 people
behavior and mood changes: sleep disturbances including nightmares, difficulty falling asleep, sleepwalking, irritability, anxiety, restlessness
dizziness, drowsiness, numbness/numbness of the limbs
nosebleeds
dry mouth, indigestion
bleeding, itching, urticaria
joint or muscle pain, muscle cramps
nocturnal enuresis in children
weakness/fatigue, malaise, swelling
Rare: may affect up to 1 in 1,000 people
changes in behavior and mood: impaired attention, memory disorders, uncontrolled muscle movements
Very rare: may affect up to 1 in 10,000 people
tender red lumps under the skin, most often in the lower leg area (erythema nodosum)
changes in behavior and mood: obsessive-compulsive symptoms, stuttering
5. How to store Singular
Keep out of the reach of children.
Do not use this medicine after the expiry date which is stated on the carton after EXP. The first two digits indicate the month; the last four digits indicate the year. The expiration date corresponds to the last day of the specified month.
Store in the original package to protect from light and moisture.
Store below 30°C in a dry place.
Do not dispose of medicines down the drain or in the household waste container. Ask your pharmacist how to dispose of medicines that have already These measures will help protect the environment.
6. Contents of the package and additional information
What Singular contains
The active substance is montelukast. Each tablet contains montelukast sodium, which corresponds to 10 mg of montelukast.
The other ingredients are:
Hydroxypropylcellulose (E463), microcrystalline cellulose, lactose monohydrate (89.3 mg), croscarmellose sodium, magnesium stearate.
The film coating consists of: hydroxypropyl cellulose, hypromellose, titanium dioxide (E171), red iron oxide (E172), yellow iron oxide (E172), carnauba wax.
What Singular looks like and contents of the pack
Singulair 10 mg film-coated tablets are beige, round-quartered, film-coated tablets debossed with "Singulair" on one side and "MSD 117" on the other.

Singular 10 mg film-coated tablets are available in packs of 14 and 28 tablets.

Not all types of packaging can be put on sale.