1. What is Piracetam AL 1200 and what it is used for
Piracetam AL 1200 is a nootropic agent that is used to treat psycho-organic syndrome, ischemic cerebrovascular (cerebrovascular) events and their consequences, especially aphasia (loss or impairment of the ability to produce linguistic production and / or to understand foreign speech ), Cortical myoclonus (hyperkinesia (rapid movements and inability to rest), manifested by single or repeated involuntary twitching of individual muscle groups), treatment of dyslexia (inability to read and understand Rooted) and treatment of vertigo (vertigo).

Indications
Piracetam AL 1200 is used for the symptomatic treatment of:
Psycho-organic syndrome with the following manifestations: disturbance of memory and lack of motivation;
Treatment of ischemic cerebrovascular accidents and their consequences, in particular aphasia;
Treatment of cortical myoclonus, alone or in combination;
Treatment of dyslexia in children, combined with appropriate measures such as treatment by a speech therapist;
Treatment of vertigo and related balancing disorders, except dizziness of vasomotor or psychic origin.

What you should consider if you are pregnant or breast-feeding
Administration of Piracetam AL 1200 during pregnancy and lactation is not recommended. If you become pregnant during treatment with this medicine, you should tell your doctor. Piracetam treatment can only be continued after consultation with your doctor who will assess the benefit / risk balance as there is insufficient experience with piracetam during pregnancy. It is not known whether piracetam is excreted in breast milk, so piracetam should not be taken during breast-feeding.

What should be considered when used by the elderly
Prolonged treatment in the elderly requires regular control of creatinine clearance in order to adjust the dose as necessary.
What should be considered when used by people with impaired hepatic or renal function
Piracetam does not break down in the liver. There is no indication of a change in dosage in patients with hepatic impairment. Since piracetam is mainly secreted by the kidneys, it is possible that its plasma concentration is increased with decreased renal function. It is recommended that half the therapeutic dose be administered in mild to moderate renal insufficiency. In severe renal insufficiency, without the patient being hemodialysed, 1/4 to 1/8 of the therapeutic dose should be used. In patients with severe renal insufficiency requiring hemodialysis, the dose should not be reduced as piracetam is excreted during dialysis.
Piracetam is contraindicated in patients with severe renal insufficiency.

What else do you need to keep in mind
In patients with blood clotting, after major surgery or severe haemorrhage, Piracetam AL 1200 should be administered with caution.
In patients with renal insufficiency, strict monitoring of serum creatinine and / or residual nitrogen is recommended.
The treatment of dyskinesia in children by administering piracetam should be performed by specialists who are sufficiently experienced in the diagnosis of the reading and writing disorders and only if this treatment is part of a general treatment plan including appropriate training programs and Education.

Drug interactions with other medicinal products
Please tell your doctor or pharmacist if you are taking or have recently taken any other medicines, including medicines obtained without a prescription.

Which medicines affect the effect of Piracetam AL 1200 and what you should have when taking other medicines at the same time
Please keep in mind that these warnings also apply to recently taken medicines.
Due to the fact that piracetam influences blood clotting, the action of coumarin derivatives (blood coagulation-lowering agents) may be increased when co-administered.
Stimulating the action of central nervous system stimulants of psychotic drugs as well as thyroid hormones in patients with reduced thyroid function (hypothyroidism).

What to consider when driving, using machines or working on unstable sites
Because patients can respond differently to this drug, some patients may need specific attention to attention and concentration monitoring at the start of treatment as well as at dose escalation.

3. How to take Piracetam AL 1200
Dosage, route and duration of administration:
The instructions given below apply only if your doctor has not prescribed otherwise.
Please adhere to them and / or your doctor's instructions for effectiveness and safe treatment with Piracetam AL 1200.
Dosage is based on the type and severity of the disease as well as the response of the patient to the therapy.

Treatment of ischemic stroke and its consequences
Adults:
Piracetam is initially administered in the form of an intravenous infusion or injection, and then the treatment is continued as described above unless the treating physician has prescribed otherwise.
Treatment of cortical myoclonus
Adults:
Piracetam is initially administered as an intravenous infusion or injection, which may last for a longer time. Piracetam film-coated tablets may then be included in the treatment as prescribed by the treating physician.

How and when to take Piracetam AL 1200
Piracetam AL should be taken with a glass of liquid (eg a glass of water) best during or shortly after a meal.

How long do you need to take Piracetam AL 1200?
For the duration of treatment, your doctor will decide on your own.
In the treatment of dementia syndrome, ischemic stroke or post-traumatic syndrome, the need for continued treatment should be reassessed after 3 months. To treat interference with reading and writing, the recommended treatment time is 3 months.
For treatment of cortical myoclonus, the duration of treatment depends on the clinical course. If muscle spasms are missing, treatment may be phased out.
Do not forget to take your medicine. Check with your doctor or pharmacist if you have not been told how to take it.

What to do if you have taken too much (deliberate or accidental overdose) from Piracetam AL 1200
The active substance piracetam has been investigated and considered to be practically non-toxic.
It is possible to increase the side effects listed below. In this case, please contact your doctor. It will determine the need for specific measures.

If you have any further questions on the use of this medicine, ask your doctor or pharmacist.

4. Possible side effects
What are the possible side effects with Piracetam AL 1200 and what measures should you take in case of it?
When treated with piracetam, it is sometimes possible to increase psychically induced uncoordinated motor activity (psychomotor activity), sleep disturbances and insomnia, nervousness, depressive disorders, anxiety, aggression, gastrointestinal complaints (nausea, vomiting, abdominal Pain, diarrhea), weight gain. Rarely, dizziness, weakness, decrease or increase in blood pressure, increased libido and increased sexuality may occur. Headache, ataxia (reduced coordination of movements), equilibrium, confusion, hallucinations, somnolence and allergic reactions (such as anaphylactic reactions, hives, skin flushing, itching, sweating) have been reported in isolated cases.
Adverse effects in adults are reported at doses of about 5 g piracetam per day. Children have similar side effects at daily doses above 3 g of piracetam. In particularly predisposed patients, hyper-excitability of the nervous system may, exceptionally, lead to a reduction in the seizure threshold. Patients who need anti-convulsive drugs should continue this treatment even if piracetam therapy is subjective.
Some piracetam-containing products have been reported to rarely cause some cases of epilepsy.

If you experience side effects that are not listed in this patient leaflet, please tell your doctor or pharmacist.

What you should take in the event of an adverse drug reaction
If any of the side effects listed above occur with you, please inform the treating physician so that he / she can assess the severity of the illness and determine the need for specific measures. At the first signs of hypersensitivity to Piracetam AL 1200, its intake should be discontinued.

Shelf life and stability of the product
The expiry date is printed on the blister and on the carton. Do not use the medicine after this date! 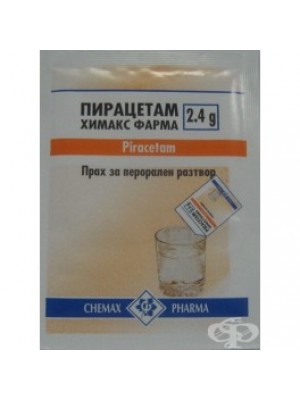