Gout is usually characterized by recurrent attacks of inflammatory arthritis—a red, tender, hot, and swollen joint. Pain typically comes on rapidly in less than twelve hours. The joint at the base of the big toe is affected in about half of cases. It may also result in tophi, kidney stones, or urate nephropathy.
The cause is a combination of diet and genetic factors. It occurs more commonly in those who eat a lot of meat, drink a lot of beer, or are overweight. The underlying mechanism involves elevated levels of uric acid in the blood. At high levels, the uric acid crystallizes and the crystals deposit in joints, tendons and surrounding tissues, an attack of gout occurs. Diagnosis may be confirmed by seeing the crystals in joint fluid or tophus. Blood uric acid levels may be normal during an attack.
Treatment with nonsteroidal anti-inflammatory drugs (NSAIDs), steroids, or colchicine improves symptoms. Once the acute attack subsides, levels of uric acid can be lowered via lifestyle changes and in those with frequent attacks, allopurinol or probenecid provides long-term prevention. Taking vitamin C and eating a diet high in low fat dairy products may be preventive.
Gout affects about 1 to 2% of the Western population at some point in their lives. It has become more common in recent decades. This is believed to be due to increasing risk factors in the population, such as metabolic syndrome, longer life expectancy and changes in diet. Older males are most commonly affected. Gout was historically known as "the disease of kings" or "rich man's disease". It has been recognized at least since the time of the ancient Egyptians. 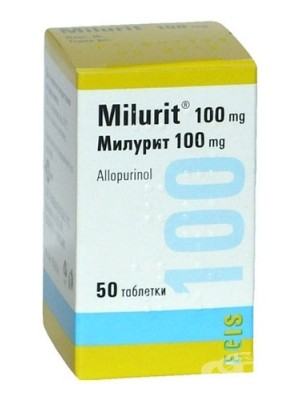 MILURIT 100 mg. 50 tablets
Brand: EGIS
What is Milurit and what to use Milurit tablets contain a drug called allopurinol. Its action is expressed in slowing the rate of chemical reactions in the body. Milurit is used: for prevention of gout. This is a disease in which the body produc..
19.00€
Add to Wish List
Add to Compare
Showing 1 to 2 of 2 (1 Pages)
×
×
×
×