Menopause, also known as the climacteric, is the time in most women's lives when menstrual periods stop permanently, and they are no longer able to bear children. Menopause typically occurs between 49 and 52 years of age. Medical professionals often define menopause as having occurred when a woman has not had any vaginal bleeding for a year. It may also be defined by a decrease in hormone production by the ovaries. In those who have had surgery to remove their uterus but they still have ovaries, menopause may be viewed to have occurred at the time of the surgery or when their hormone levels fell. Following the removal of the uterus, symptoms typically occur earlier, at an average of 45 years of age.

Before menopause, a woman's periods typically become irregular, which means that periods may be longer or shorter in duration or be lighter or heavier in the amount of flow. During this time, women often experience hot flashes; these typically last from 30 seconds to ten minutes and may be associated with shivering, sweating, and reddening of the skin. Hot flashes often stop occurring after a year or two. Other symptoms may include vaginal dryness, trouble sleeping, and mood changes. The severity of symptoms varies between women. While menopause is often thought to be linked to an increase in heart disease, this primarily occurs due to increasing age and does not have a direct relationship with menopause. In some women, problems that were present like endometriosis or painful periods will improve after menopause. 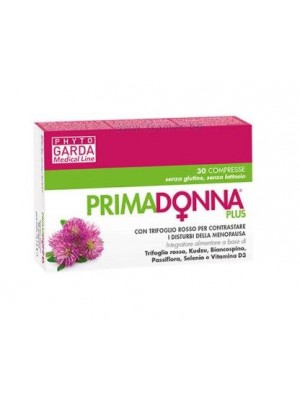 Primadonna plus 30 tablets
Prima Donna is a specially developed combination of herbal ingredients designed to relieve the symptoms (physical and mental) that occur with a decrease in the level of estrogen hormones before and during menopause. It contains active phyto complexes..
56.00€
Add to Wish List
Add to Compare
Showing 1 to 1 of 1 (1 Pages)
×
×
×
×